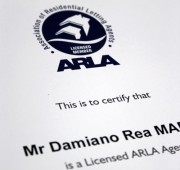 October sees two important changes to regulation in the residential lettings sector, one of which we welcome as long overdue, another as a slightly sinister move to have us act as border police.

First the welcome legislation. From October letting agencies must offer a redress scheme to tenants. Reputable agencies that have joined a regulatory scheme, in our case, ARLA, the Association of Residential Letting Agents already have such a scheme in place so this legislation is aimed at landlords and agencies that do not. The framework will allow tenants with a grievance to take their case right through to the Ombudsman if the situation cannot be resolved.

We have long lobbied for members of our industry to be required to register with a professional body who check qualifications, insurance and provide a professional framework including a complaints structure. The redress scheme is the first step down that road, offering the highest professional standards to landlords and tenants. Had Government fully embraced industry wide regulation another new and slightly insidious piece of legislation may have been avoided.

From October landlords are responsible for checking immigrants’ status and right to reside in the UK. Failure to comply will result in fines of several thousand pounds and it is lettings agents who will bear the brunt of this new responsibility. All well and good you may feel. This new requirement can only be a good thing so why describe it as slightly insidious?

Housing charity Shelter has stated its concern that the legislation could put landlords off tenants perceived as ‘risky’, that is to say, anyone with a foreign sounding name. The charity believes other groups could be disadvantaged such as domestic violence survivors who have escaped without documentation and vulnerable young adults with out access to their own documentation.

Like the redress scheme this legislation is aimed at ‘rogue’ landlords and letting agencies who do not carry out the necessary checks. As ARLA members we already carry out identity and credit checks on all our prospective tenants irrespective of their surname or circumstances. Now we are being asked to act as border police with the threat of punitive fines if we get it wrong.

There is a requirement to report to the authorities ‘any suspicion’ that tenants may be illegal immigrants. An example could be a prospective tenant with the right to live, but not to work in the UK who’s credit check indicates full time employment. Get this one wrong and it is possible a landlord could be prosecuted for ‘facilitating a breach of immigration law’ with a penalty of imprisonment. Nobody is clear on the potential outcome for landlords accepting fraudulently obtained documents which had already fooled the Home Office, a case of which was recently highlighted in a national newspaper.

Had Government taken the bull by the horns and simply demanded regulation of the lettings sector through existing professional bodies, this slightly woolly piece of legislation might have been avoided. And my poor staff spared the spectacle of me whispering “Your peppers pleez” in a faux Soviet era accent. While I quite fancy modelling myself on Alec Guinness as the secret policeman in Doctor Zhivago I am not sure anyone else is convinced.