The Lettings Agency of the Year Awards 2014 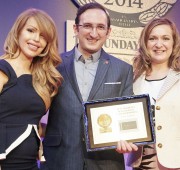 A highlight of the year for lettings team across the country is The Sunday Times Lettings Agency of the Year Awards. For the 3rd year running we have entered and put Heaton Property forward for scrutiny by a judging panel overseen by The Property Ombudsman, Christopher Hamer.

Over the last few months we have prepared and submitted details about how we operate along with a wealth of supporting evidence to show the judges why they should consider our service worthy of recognition.

On Friday 20th June, over 500 leading lettings agents from throughout the UK attended a glittering ceremony at The Lancaster London Hotel opposite Hyde Park where the winners for the lettings agency industry were revealed.

The winners were presented with their awards by Katie Piper, the best-selling international author, inspirational speaker, TV presenter and charity campaigner who has rebuilt her life after surviving a brutal attack in which she had sulphuric acid thrown in her face, with renowned journalist, author and newsreader Penny Smith acting as compere.

These awards have become widely recognised as the most prestigious and difficult to win. With more entrants than ever before, nearly 6,000 offices were represented this year; only the very best of the best were crowned as winners.

The team at Heaton Property were absolutely delighted to be awarded a Gold Award for Property Management. This is the third consecutive year we have been recognised at the industry’s leading award ceremony and the fact we have been recognised in a national category that has an exceptionally high level of competition is something we are all very proud of.

We’d like to take this opportunity to thank you again for your support.