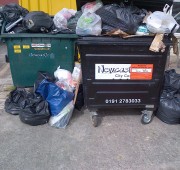 Hands up everyone who is a fan of fortnightly bin collections. No? Thought not. But for landlords, tenants and letting agencies an apathetic attitude to cooperation and overzealous enforcement have created a problem that has become far worse than it could be. Worse, the Newcastle City Council interpretation of their responsibilities is costing us all money and having a detrimental effect upon the environment it is charged with protecting.

We have recently gone through the hectic ‘change over’ when our student tenants go home for the summer and new students take up residency. While most students leave a clean and tidy apartment, some do not. No problem you would think. We send a van round and remove the waste, taking it to a tip for disposal. Wrong. According to the Council as soon as a lettings agency touches the waste it becomes ‘commercial waste’, even though it was generated in the home. This means we have to call the Council run service ‘Envirocall’ to come and collect the waste, often waiting ten days for them to show up.

Recently a Fresher student moved into her new apartment to find the bin full and several black bags left by the previous tenant lying in the back alley. We arranged for Envirocall to collect the waste. Which they took away and rooted through, finding a bill addressed to the flat. Our Fresher tenant was alarmed to receive a knock on her door to be confronted by two environmental enforcement officers who told her she was liable for a £75 fine for fly tipping. Our student pointed out that she had been in the flat for a week and had not received a bill, much less thrown one out. The officers then advised her she would be summoned to court and faced a criminal conviction if she did not pay.

Newcastle City Council claims to be addressing the issues raised by fortnightly bin collection and resulting rubbish in the street by appointing someone with the snappy job title ‘Senior Neighbourhood Manager for Environmental Awareness and Behavioural Change’. To date the only evidence I have of an attempt to change behaviour is a leaflet campaign featuring a picture of a rat. I guess that counts as ‘thinking outside the box’ at the Civic Centre, but it has little effect on the street.

I have a better idea. Devote resources to bin and rubbish collection rather than foot-long job titles for people who do not appear to achieve much and enforcement officers who’s customer facing attitude leaves something to be desired. Maximise the use of the resources in place and clear up our streets by picking up street rubbish with the bin collection rather than ignoring it until somebody complains. Then waiting ten days for action.

We recently put our recycling bin out and were puzzled to find it had not been emptied. I contacted the council and was told the bin had been full of water and the operative could not move it. So I went to check. No water in the bin. My pregnant wife had put it out earlier without much effort. So I checked our CCTV. And saw the operative walk up to the bin, lift the lid, close the lid and walk away. Astonishing.

This employee of the Council had just left rubbish in the street where it would fester for another fortnight. Had we done so… yes, you guessed it. A £75 penalty with threats of further legal action. Don’t start me on the time we spend looking for our empty bin which can be dumped 200 yards up the alley by operatives.

Before this turns into a rant may I make a suggestion to Council officers reading this? Work with us. Landlords and lettings agencies would like nothing better than to see the streets around our properties clean and tidy. You call us Stakeholders but the only stake we hold is an expectation of rubbish service and an attitude problem. I will volunteer to head the initiative from our side. I shall call myself ‘The Peoples Representative for Cleanliness and Righteous Behaviour Czar’.