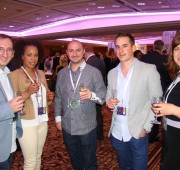 At the start of 2012 Heaton Property was judged by a panel of property experts chaired by The Property Ombudsman, Christopher Hamer. The judging took place over the course of four months. A combination of mystery shoppers pretending to be both prospective landlords and tenants, as well as a comprehensive questionnaire and telephone interview were some of the challenges we had to endure.

On Friday 25th May, over 450 lettings agents from all over the UK attended the awards ceremony at The Lancaster London Hotel opposite Hyde Park where the winners were to be revealed. Over 5000 agencies were in competition for the awards.

Whilst we are confident with our service and the feedback we have received from both landlords and tenants is always positive, nothing could have prepared us for the surprise we got when they started reading out the awards for best single office in the North of England. As they got to the prestigious gold award ‘Heaton Property’ was called out and the picture of the team appeared on the huge screens either side of the stage, our table came to life… we were certainly the loudest of the winners!

Below is the judges’ report:
“Judges praised this agency’s flexible contracts for recent graduates and young professionals, and its focus on managing quality properties, due to its ethos that staff shouldn’t move a tenant into a property into which they wouldn’t move themselves. Facebook is put to great use to liaise with landlords and tenants clients, and extended office hours aim to suit tenants’ working days. Judges were impressed by the fact that Heaton Property has never had a deposit dispute, which required third party mediation or Court action, proving that high-quality service standards are at the heart of its business. The Newcastle-based agency prides itself on its Geordie hospitality and transparent systems and processes as well as its user-friendly website. Judges particularly liked the agency’s ProShare tenancy scheme, which aims to smooth the process of tenants who don’t know one another living together, by, for example charging each tenant a fixed fee to cover the rent and all utility usage.”

We received our award from former Olympic Champion, Sir Matthew Pinsent who earlier in the day had told the audience some incredible stories of his achievements. After the awards the team went to Maze by Gordon Ramsay for a celebration cocktail before heading back to King’s Cross and on to Newcastle with our award…. Incredibly, the office was open as normal on 26th May!