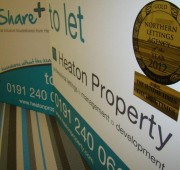 Legislation has been the hot topic for landlords here in the north east this summer and decisions arrived at will have an effect upon their customers; the tenants who rent their properties.

Newcastle City Council is currently embarking on a consultation process in an attempt to regulate the proliferation of lettings sign boards in the city, with several options open to them.

First, a complete ban on lettings boards. Next is to follow the example of Leeds and allow lettings boards that are flush with the building. Another option is to have a three month ‘fallow period’ from December through February when all lettings boards would have to be removed. The final option is to do nothing and retain the status quo.

Given lobbying from residents associations and general public opinion it would seem that change is in the wind and some form of legislation will follow, not least because the current voluntary code of practice is ignored by some lettings agencies.

Naturally the lettings agency sector is opposed to an outright ban since we believe that lettings boards allow tenants to make an informed choice as to where they want to live and who they should contact when they spot the perfect house or apartment.

Lettings boards also allow new players to break into the market, bringing innovation and encouraging competition. These start-ups frequently cannot afford a big advertising budget in their early months of trading and the Council view that the internet and social media can replace lettings boards does not hold water. There is a cost attached to a website that will reach the front page of an internet search and the popular online agencies such as Zoopla are as expensive as press advertising. As a letting agency we seek to work with the communities in which we operate but we feel there are commercial considerations to be taken into account.

Part of the problem in Newcastle lies with the long lead-in time for student rentals. Frequently agencies will start advertising in October for rentals starting the following summer. With rentals to professionals the boards will come down immediately the property is let simply because tenants do not want a ‘To Let’ sign outside their lovely new home. But the real root of the problem lies not with the majority of responsible letting agencies who adhere to the code of practice, rather it lies with the small majority who do not.

And this small majority has caused some big guns to steam into the debate with shadow housing minister Jack Dromey launching a policy review calling for control of unregulated lettings agencies. Unlike estate agents, lettings agencies are not regulated in spite of the large amounts of money we routinely handle.

Finally, lest our landlord clients feel left out, a number of north east councils are watching Newham Council as it will become the first in the UK to demand that landlords register and follow best practice from January 2013.

Responsible landlords and lettings agencies already subscribe to professional bodies like the Property Ombudsman, the National Landlords Association and Association of Residential Letting Agents. They will have a process in place to ensure compliance. It is lack of voluntary compliance by the few that is causing an issue with councils, residents associations and the public. We believe this raft of proposed legislation to be an important step in putting the lettings business on a professional footing, thus helping our clients the landlords and our customers the tenants.

Link to The Property Ombudsman