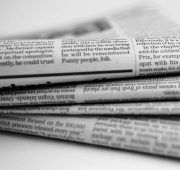 I am not sure 2017 was a worse year for ‘fake news’ than any other year since the beginning of time, but it was certainly the year in which the expression came into being. Collins English Dictionary defines fake news as ‘false, often sensational, information disseminated under the guise of news reporting’ and we are all pretty clear what constitutes fake news in the media.

My concern is not so much the ‘Elvis spotted on the moon’ type of fake news. Rather it is when politicians generate much quoted soundbites in order to sway a sector of voters. Late last year Jeremy Corbyn targeted ‘generation rent’ with promises of longer tenancies and the right of tenants to remain in a property when their lease expires.

The spectre of the Big Bad Landlord was conveniently trotted out by newspapers and broadcasters who might have spent a little time checking the facts. Aside from the fact that most landlords are very happy with secure, long term tenants the facts of the matter do not support the knee-jerk view that the private rental sector needs draconian legislation in order to provide security of tenure.

Figures from the Department for Communities and Local Government indicate that on average, private rental sector tenants have lived in their homes for four years. The statistics show that just one tenth of all tenancies in the private rental sector are terminated by the landlord or letting agent. These figures demonstrate that the vast majority of tenancies are terminated by the tenant and that both landlord and tenant are happy with longer tenancy agreements.

At Heaton Property we promote fixed term tenancies which are reviewed every year at no cost to the tenant. The main reason we do not offer longer fixed term tenancies is not because landlords want to hike the rent. It is usually a term in the lease or mortgage that insists upon an annual review. It is hard to see how legislation can overcome that hurdle since banks and building societies are not keen on Government dictating their terms of business.

In Europe where renting is a far more accepted model than here in the UK, longer term tenancies are more common. Longer agreements are generally driven by landlords who seek a long term and mutually beneficial relationship with their tenant. Top-down legislation aimed at protecting tenants will often have the opposite effect as investment dries up and with it, the availability of quality rental properties.

For a whole raft of reasons, Generation Rent is a fact of life and looks set to be so for the foreseeable future. The answer to our lack of affordable homes is not to drive landlords from the market, it is quite simply to build more affordable homes. That and for politicians to stop throwing out juicy soundbites without analysing the background issues. Because, to quote US Congressman Jimmy Gomez, “When fake news is repeated it becomes difficult for the public to discern what’s real”.