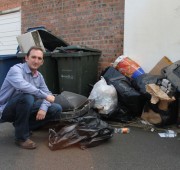 I confess to a fascination with the history of Heaton and the areas journey from small, outlying farms to the current vibrant urban landscape. During the centuries, Heaton must have endured crimes that would horrify today’s hipster café society. From the 13th to the 17th century the Border Reivers would have made life challenging as Heaton was well outside the city walls. The 19th century would have seen footpads, cut-purses and mountebanks lurking in the hedgerows.

And now comes a wave of crime that has landlords, managing agents and tenants gnashing their teeth in rage. Binjacking. Yes, the theft of wheelie bins has become a major issue here in Heaton and, no doubt, elsewhere in the north east.

Originally bins were provided free by the council. A simple solution to keeping our streets free of rubbish and ensuring its efficient disposal. All well and good, until your bin is stolen. Then the Council require a payment of £25.00 to replace each one. Quite why anybody would want to steal a bin is beyond me, but it happens. And it causes a chain reaction.

Let us say the tenant of number 6 puts out their bin like a responsible citizen. And comes home to find it missing. They need a bin and the simple solution is to walk up the street and purloin the bin from number 26. Now number 26 is without a bin and the simple solution is…. I am sure you can see where this is going. It is quite amusing to imagine masked binjackers criss-crossing the back lanes of Heaton at dead of night dragging squeaking wheely bins in their wake.

But as with any crime, the result can be less than amusing for the victims. Let us say a tenancy has ended. The outgoing tenants have put their bins out which have been emptied then vanished. The incoming tenant expects bins to be provided. The landlord has supplied bins and is unwilling to shell out £50.00 for new ones.

The Council really do not care who pays them for the new bin and are now using their new property licensing powers to come down hard on the landlord rather than trying to mediate. A tenant of ours rang the Council recently to report that she had no bin. A Council Licensing Inspector duly arrived. She walked straight into the back yard. “You have no bins” was her august judgement.  Clear to see why these guys earn the big bucks?

The end result of this ludicrous situation is serious. Rubbish accumulates and can pile up in yards and back lanes. Glad tidings for rats, which are becoming an increasingly common problem. The answer is pretty simple. The Council should replace stolen bins. Overall the numbers are small but the knock-on effect of binjacking is serious. In 1927 the composer Ray Henderson sang “The best things in life are free”. I am sure he did not envisage free bins when he wrote it, but streets free from rubbish must rank, if not the best, certainly as a pretty good thing in life.

Happy Christmas in a Nutshell!