A Crab For Your Flat 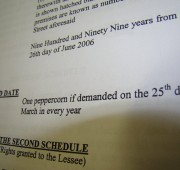 There is good news in the post for leaseholders as legislation comes into force to remove some of the most outrageous abuses of this legacy arrangement. ‘The Leasehold Reform (Ground Rent) Bill’ has received Royal Assent. So from June, new leases will no longer be allowed to charge Ground Rent. The old ‘peppercorn rent’ has made a permanent comeback. Why peppercorn rent? Why not just allow the leaseholder to pay nothing?

This is because a leasehold agreement is a contract and in order to be binding, must include a consideration for the freeholder. Back in the mists of time, peppercorns were a valuable imported spice so a peppercorn had value. Over the years, solicitors got whimsical with this caveat and there are examples of one crab, a single red rose, one apple and a posy of flowers being written into leasehold agreements.

Respected leasehold expert Shula Rich, who has trained members of the Heaton Property team, first became involved in leasehold legislation when the leaseholders in her block were presented with a £2,000,000 bill by the freeholders, Mars Securities of chocolate bar fame. A friend living in an eight flat block in Newcastle received a bill for her share of £40,000 for a new roof. She commissioned an independent surveyor who ruled the roof was fine.

We are increasingly taking instructions under the ‘Right to Manage’ legislation.  This is the mechanism by which owners can take control of their block. Prior to this useful bit of legislation, the Leaseholders had to prove mismanagement and were often subject to very high legal costs or had to purchase their freehold.

Every time we take over the management of a block, we find ways to significantly reduce the service charge demands. The main issue is often excessive insurance premium costs. The key here is to be absolutely thorough and examine every aspect of every contract from lift and garden maintenance to decoration of communal areas.

Until recently block management has largely been the preserve of big outfits based in the south east who may have hundreds of properties under management. Often contracts have simply rolled over for years and nobody has questioned value for money. We have the advantage of local knowledge and a local skills base. Our trades people are experts in their field and while they may gaze wistfully at fees charged by their counterparts in the south east, they have their feet firmly on the ground here in civilisation.

These new working methods represent wins all round. We get additional instructions, our contractors get a steady stream of local work and leaseholders, at long last, get a fair deal. This has all been a long time coming and as it is simple common sense, one may wonder why it has taken so long? The cynics among us suggest that legislation must be approved by the House of Lords where, by a spooky coincidence probably the biggest collection of freeholders in the UK sit in judgement. It’s a thought, but my sunny Italian disposition does not allow me to comment. Instead, I simply welcome the changes with open arms.

Happy Christmas in a Nutshell!